SPECIAL FEATURE:  For the 1st time, this blog has the privilege to have a guest share some of their ideas about high traffic grass fields.  Mr. Allen Reed of FC Dallas Stadium is one of the USA’s best sports field managers, illustrated by the tremendous success he has had at FC Dallas.  FC Dallas Stadium is one of the most, if not the most, high traffic professional stadiums in the USA.  Yet with that challenge, FC Dallas Stadium was named the 2011 STMA Professional Soccer Field of the Year, and is over and over referred to as one of the top fields in the USA.  THANK YOU to Mr. Reed for sharing his experience w us all!!! 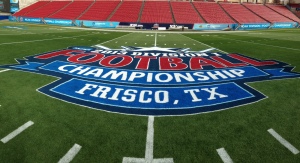 Keeping with recent topics discussed on this blog, I want to share some insights on our experience here at FC Dallas of hosting multiple events on natural grass.. When the MLS schedule came out I enjoyed the fact that on several occasions we had ten to fourteen days between each soccer match. That was until our concert and high school football schedule came out and filled several of our open weekends. Specifically April and May have been very busy, but long stretches of multiple events are nothing new to us. It has been our mode of action since we opened in 2005.  Bring on the challenge!

The busiest part of that schedule has been the last seven weeks in which we have had two concerts, eight soccer matches, and six training sessions.  The part of the schedule that was the most challenging was the concerts that fell on back to back weekends, followed with two soccer matches the following week. The best design feature of our stadium, from a groundskeeping perspective, is the permanent concert stage on the north end. With this feature we are able to do a quick turn around with concerts while hosting other events soon after with minimal damage to the pitch. The concert floor is only down for fifty to fifty-five hours for each concert. For a Saturday night concert, we start laying the floor down early Friday morning and pick it up early Sunday morning. In years past we have successfully hosted a soccer match less than twenty-four hours after a concert. 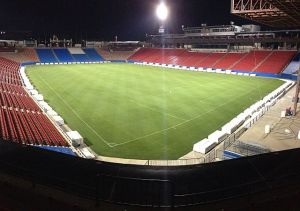 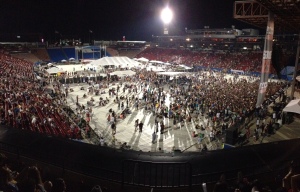 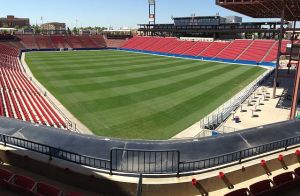 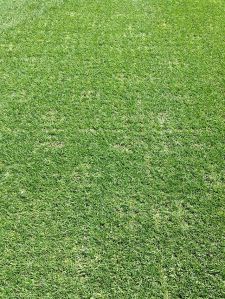 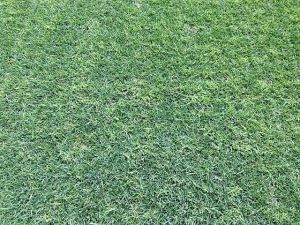 May 2: No Signs of Concert Damage- 24 Hour Prior to Next Concert 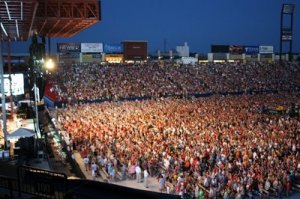 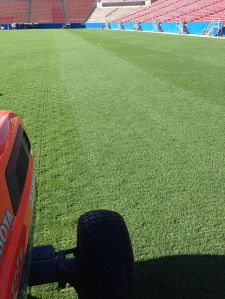 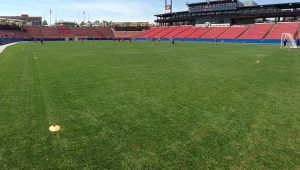 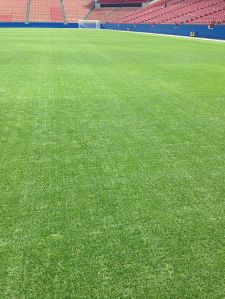 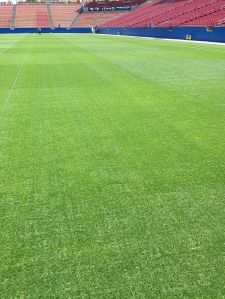 May 7: Preparing to Paint Pitch 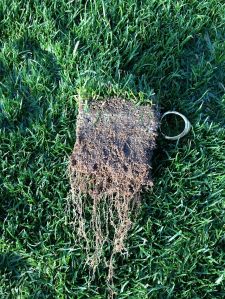 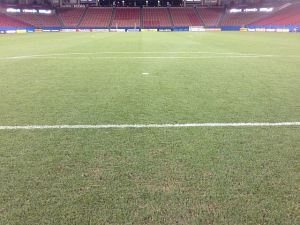 May 8: Post Match, Little Damage: Next Match in 3 Days

AERATION
Over the past few years we have been very successful in hosting multiple events like this on natural grass due to our extensive aeration and fertility programs. We do some form of aeration every week. After each event/match, we cross tine aerate the entire pitch. If weather and time permits, we will pull cores. It is very important for us to relieve compaction to allow for proper drainage, release any toxic gas build up in the soil, and to have fresh oxygen available to the roots.

During a three-week opening back in March, we were able help prepare the pitch as well using a new technique brought over to the U.S. from Europe. We recycle dressed our stadium pitch for the first time. This allowed us to aerate and open up the pitch down to a depth of 8”. With our normal aeration we are only able to go to a depth of about 4-5”. Being able to go to deeper benefited us during the busy schedule of April and May, and created natural topdressing for us as well. 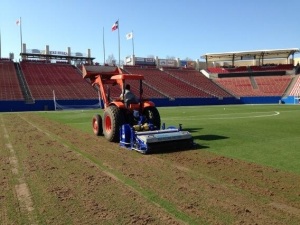 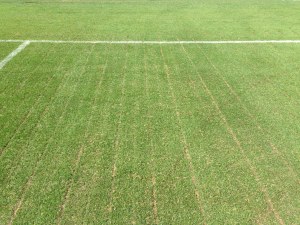 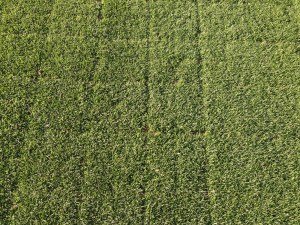 May 25: Following Recycling Dressing and Dragging 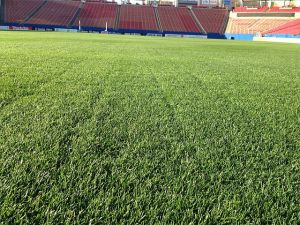 FERTILITY
My fertility program is a unique to what most consider as “recommended” in which a 3-1-2 ratio of N-P-K is called for in growing healthy turf. For as long as I can remember, we have been taught that bermudagrass on sports fields needs to be fertilized at a rate of 1# of nitrogen a month AND that nitrogen should be the main focus of any fertility program. I thought like this and we tried to push the field with nitrogen to get it to grow out of damage caused from events.

Now it has become evident that by doing this, we were actually making the plant weaker due to excessive growth and weak cell walls. The field could not survive the wear and tear of our schedule, equaling in a full field resod every summer. Then about 5 years ago, I did a complete overhaul on my fertility program and turned my approach to maintaining healthy, strong, durable turfgrass. I took the 3-1-2 ratio and flipped it, I now fertilize at an estimated ratio of   2-1-4 over the entire year.

The thought process behind this change was that if I make the grass as strong as possible by applying more potassium, it is less likely to be damaged from any event. I apply granular potassium at a rate of 1# a month while supplementing with liquid applications of phosphorous, potassium, and iron. With the increase in potassium I was able to increase the disease, wear, heat, and cold tolerance of the bermudagrass. The grass went from struggling to recover between events to showing little signs of an event having occurred.

Also I significantly reduced my need for fungicides on the rye grass overseeding.  Nitrogen outputs now are about 5#s of N a year, with a majority of that applied during transition or as needed during the high school football season. The rest of my nitrogen (1.5#s) comes from a, 26-2-9, 180 day slow release applied every July. This year, NO nitrogen as currently been applied until today when the rye to bermuda transition starts.  These low nitrogen and high potassium rates allow us to achieve consistent growth with little need for recover due to the increase wear resistance of the grass.

CONCLUSION
I do concede it took time for me to completely trust this program and change the way of fertilizing that had been so heavily taught over the years. Now that I have seen the results and had wonderful success I see no change for the upcoming future!!  Since changing my fertility and aeration programs, we have not had to do a full field re-sod since 2008 while averaging sixty-five soccer matches, thirty training sessions, five concerts, and eighteen football games a year.

As turf managers, we are faced with the challenge of maintaining healthy turfgrass while balancing the demands of hosting multiple events in a short time frame. Our success is just one example that shows grass can take more events than what we have been taught in the past. It only takes a little time and effort on our part. I am so glad I was willing to welcome change and embrace the challenge!