Reflecting back over our sharing during the last year, we have realized that a pair of posts referencing two different topics at two different times inadvertently are extremely related. Their relation has lead to a trial about to begin utilizing supplemental grow lights to sustain bermudagrass growth through the fall.

“Transition Zone Bermudagrass Out of Gas This Spring” looked into/ shared lessons we were learning during spring and early summer bermudgrass struggles following a mild winter. Bermudagrass didn’t go into full dormancy with the mild temperatures. But instead of mild being a positive, lack of dormancy was a negative because the green and growing bermudgrass didn’t have the required light level for efficient photosynthesis. Carbohydrate/ energy reserves in the bermudagrass plants were burned up and the bermuda could not give a spring surge for growth and recovery.

In the “Let There Be Light Follow Up”, we took a look at bermudagrass light requirement and discussed the decrease of natural light from the sun in the fall season. By October, the sun does not produce enough light to sustain efficient bermudagrass photosynthesis and the grass slows down. Temperature change then follows to fully induce dormancy. Supplemental light could have a positive impact on bermudagrass growth then to sustain growth.

These two pieces are very much related, even though we were looking at different things at different times.  And there was a strong hypothesis coming from both:  Supplemental grow lighting will sustain bermudagrass growth late into the season.

To test the hypothesis developed from these pieces, a trial utilizing supplemental grow lighting will start in just a few weeks at Duke University. Duke, located in the transition zone in Durham, NC and growing Latitude 36 bermudagrass, is the perfect location for such a trial. Their forward thinking field management team, lead by Scott Thompson and Ian Christie, have already made the move away from ryegrass overseeding and focus all their skill on sustaining bermdagrass growth through football season. Thus such a trial is a natural progression. This trial will track total light levels for the field on the top of the stadium, light levels under the lights, soil temperature, growth, and recovery from game traffic both with and without light.   Also documented throughout will be the ability to hold sheer strength and durability on the surface.

We took at look at the Par natural light from the sun in “Out of Gas”. Here is the chart: 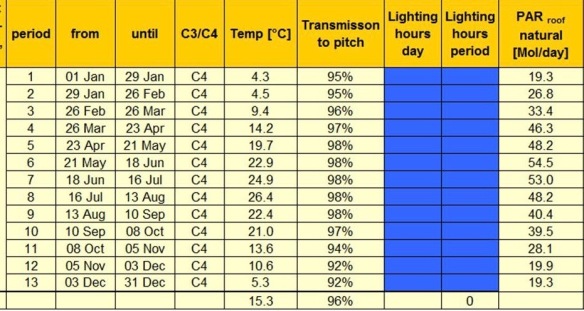 The results of this trial should be clear, much like the original USA supplemental light trial carried out in Green Bay using light to sustain cool season grass growth into December. To back up our current hypothesis with bermudagrass, we have dug into the research to find previous trials involving bermudagrass growth and supplemental light. Interestingly enough, the single research trial we found was found was directly examining the relationship of light and temperature in bermudagrass growth.

“Practically, the problem of bermudagrass turf’s dormancy could be solved via increasing the photoperiod in months with short day lengths. This treatment would be efficient and useful for turfgrass managers to apply in landscapes and stadiums.”

The research was performed in growth chambers and was carried out over 2 years. It explored a range of temperature and light amounts. The conclusions of the study support the previous theme that has developed that supplemental light will delay bermudagrass dormancy even in colder temperatures. Ultimately, the conclusions of the study lay the ground work for confidence that the Duke trial will succeed in sustaining bermudagrass growth through the end of the season. In the bigger picture, the results of sustained growth could yield in reducing or eliminating ryegrass overseeding on many American football fields. Or even more helpful for field conditions and field safety, could reduce and/or eliminate sod repairs during late season play on grass fields.

The study also reinforces that the new installation of lights at M&T Bank Stadium in Baltimore will yield great success in sustaining bermudagrass growth late into the NFL season. Even with Baltimore being further north and having a much more harsh winter climate than Duke, the results should be dramatic because of the under soil heating system that Sports Field Managers Don Follett and Sean Kauffman are able to utilize. Maintaining a desired soil temperature in combination with supplemental light through the fall will maximize growth and recovery to the fullest extent.

From hypothesis to research and now into actual practice. The potential for supplemental light to sustain bermudagrass growth certain seems to be the future approaching the present quickly.  With data and results continue to support the need for supplemental lighting, the next step is accept the possibilities and expand its use on natural grass surfaces.  This will pair with evolving technology in grass genetics and plant feeding to be able to sustain increased use  on natural grass with reduced repairs.  The future is BRIGHT!