Walton Field was one of five college soccer fields to be Universe fraze mowed in 2014, and one of 19 total fields in the US. Unique to Mr. McPherson’s use of the technique at Mizzou, Walton Field had the shortest regeneration window before it’s next use. Also unique, Walton Field was the 1st soccer field ever maintained by Universe fraze mowing developer Jerad Minnick. Minnick, President of Growing Innovations and creator of Growing Green Grass, is a graduate of Mizzou and alumni of Mizzou Athletic’s Sports Turf intern program.

For more on the development of Universe fraze mowing, see www.GrowingGreenGrass.Net.

Fraze mowing bermudagrass w/ the KORO Universe® Field Topmaker rotor became an active practice on dormant bermudagrass at FC Dallas Park in March.  Now for the 1st time, the practice has been used on bermudagrass greening up and starting its summer growth at Maryland SoccerPlex (NW side of Washington, DC).  The Patriot bermudagrass on  7 fields at SoccerPlex has been actively growing for about 3 weeks…  so fraze mowing is taking place right at the time of transitioning the rye grass overseeding out of the bermudagrass.

Fraze mowing 2 fields took place on Thursday of last week, May 30.  The top 1/2″ of the field was removed w/ the benefits being:

4)  smoothing the surface of the top of the field

With all the removal, the bermuda stolons and rhizomes were exposed to the sunlight to be allowed to green up completely and actively grow across the field instead of fighting to get up through the shade of the thatch/organic and competition of the rye/ poa. 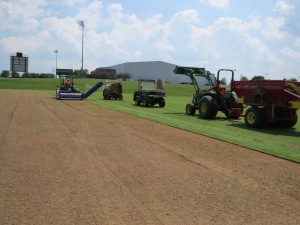 Following the “cleaning off” via fraze mowing, the fields were scarified at 1″ deep w/ a verticutter in 2 directions to cut the stolons and rhizomes to increase the number of plants and promote lateral and leaf growth.  Each point the bermuda is cut will promote growth and increase density as the fields fill-in. 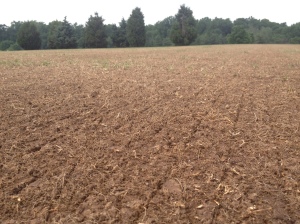 Following fraze mowing and scarifying, the fields were put into a heavy watering cycle to keep the bermudagrass soaked down in the soil… much like sprigs would be soaked when they are planted from sprigging.  The water will help the remaining dormant plants to green up and start to grow.. and reduce the stress of the fraze mowing.

In 5-7 days time when leaves have re-generated and can be foliar fed, foliar bio-stimulant will be applied to promote more leaf and shoot growth.  Because the leaves were removed from fraze mowing, the photosynthetic surface has been removed.  Thus the additional of carbohydrates, amino acids, and plant hormones will provide food and energy to promote quicker regeneration .  1/2 lb of ammonium sulfate will also be applied, along granular polymer coated nitrogen (N) to release at 1/10th lbs N a week for the next 18 weeks and polymer coated phosphorous (K) to also release at 1/10th lbs K for the next 18 weeks.

The 2 fields clean off on May 30th re-open on June 15th to full play.  (so closed 16 total days) Stayed tuned to track the re-establishment!

On Jan. 30th, we shared in a discussion about the “concept” of fraze mowing bermudagrass w/ the new Universe® rotor for the new Koro Field Topmaker.  The feedback and idea exchange was absolutely fantastic!  It seemed we were onto a potential breakthrough for bermudagrass thatch management.

Last Saturday, March 23, the “concept” became reality as the Universe® made its world debut in Dallas, TX at FC Dallas Park.  The results speak for themselves: 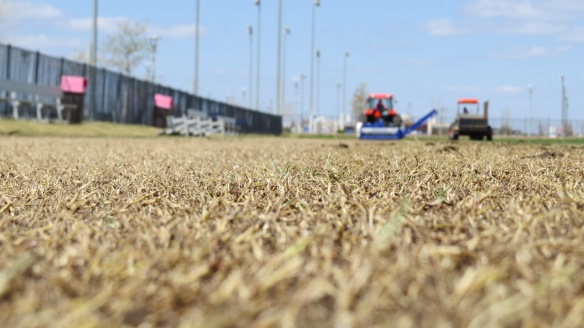 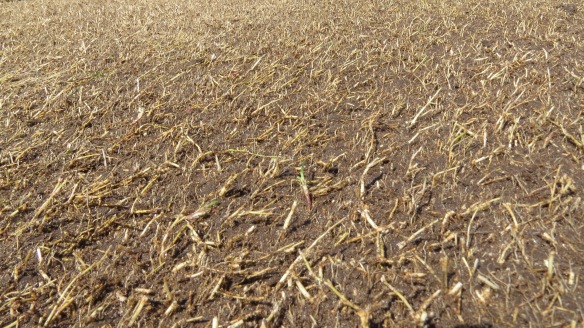 The rye grass overseeding was removed, along with the thatch, organic layer, and weed seed bed.  Left behind is a mat of stolons and rhizomes that will immediately re-generate leaf blades and begin to grow laterally across the ground.  In bermudagrass weather (FC Dallas bermuda is primarily dormant for a few more weeks), the plant tissue remaining will push out leaves in 4-7 days.. immediately giving the field surface a green appearance again.  Then within 14-21 days, active growth will have the field surface nearly completely re-covered with strong, durable plants ready to sustain heavy traffic.  Fraze mowing also smoothed any undulations in the surface, making the fields as smooth as pool tables.  Overall, the results were absolutely spectacular!!

During the weekend demonstration, FC Dallas Park had 3 fields receive the Koro Renovation Process (Fraze mowed to clean out the thatch, organic layer, ryegrass, and weed seed/ recycle dressed/ smooth drug).  1 field was fraze mowed w/ the new Terraplane rotor, making its USA debut…  then 2 fields were cleaned out w/ the Universe® ,making it’s world debut.  Once the fields were cleaned out, the KORO Recycling Dresser ameliorated the sand… allowing air to be infused back down through the profile.  The topdressing the Recycler created covered the stolons and rhizomes, allowing them to be protected and encouraged re-generate even faster.  Mr. Allen Reed also became the 1st high level professional stadium groundsman in the USA to run the Recycling Dresser on a stadium field, following the likes of Mr. Paul Burgess of Real Madrid’s Estadio Bernabeu. 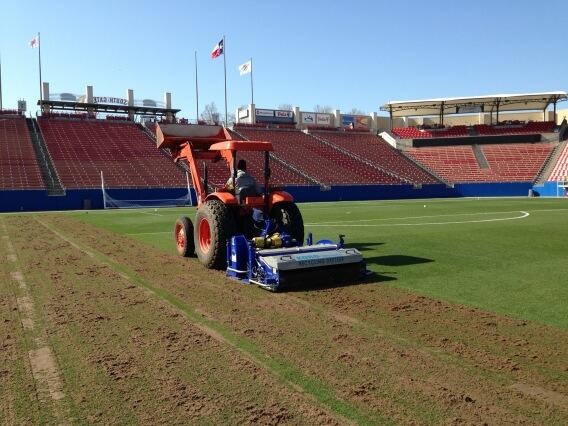 THANK YOU to Mr. Miles Studhalter, Mr. Allen Reed, and Mr. Tom Jones of FC Dallas Park for believing in the concept of fraze mowing bermuda w/ the Universe® enough to be the 1st to have it demonstrated and performed.  Their belief and feedback has been essential in bringing the concept into real life.  They were convinced that the practice of cleaning out the rye grass, thatch, organic, and weed seed would provide a stronger, more durable playing surface going into the future.  Thank you again to them.. they are the best of the best!!

Also, thank you to Mr. Joe Pemberton, Head Groundsman of Manchester United’s Carrington Training Ground, for providing feedback during the process.   Joe, in the USA on a short holiday, stopped in to observe the Universe® debut.  It was a privilege to see Mr. Pemberton, he absolutely is one of the world’s very best Field Managers.  Thank you to him for allowing us to ask so many questions!

And finally, a very special thank you to Imants BV (@ImantsBV) of Reusel, Netherlands and Campey Turf Care Systems (@CampeyTurfCare) of Manchester, UK for the development of such a fantastic, forward thinking tool in the Universe®. Imants leadership, along with Mr. KO Rodenberg (KORO) and Campey Turf Care Systems are completely changing sports field maintenance around the world.  Mr. Simon Gumbrill of Campey was essential for the debut of the Universe® in Dallas, thank you to him for taking the time to come across to the USA to lead, teach, and enlighten us to new ideas!  Simon, Thank You!

Overall, the weekend demonstration trials were a complete success.  Fraze mowing bermudagrass w/ the Universe® is no longer a “concept”.  It is now a developing maintenance practice.  Cheers to those who helped make it possible! 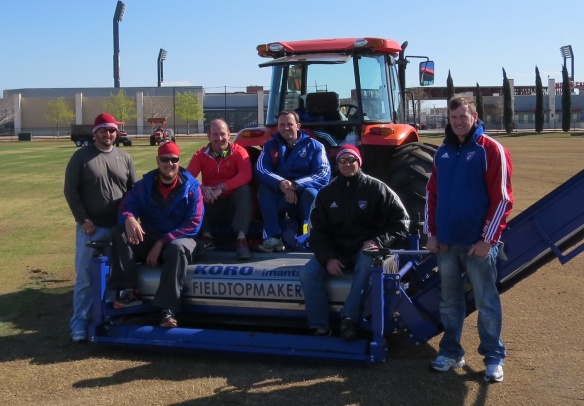